Back on track and looking back on last years trip

Hey hey!! More than a year ago, since I posted something here.
There have been lots and lots of things going on, a lot of travelling and fun, some bad things, but mostly work. When you finally find a job you like, it can absorb you completely and you become your profession completely. I never had a job that I enjoyd so much as being a teacher. I love working with teenagers. Well enough said about that.

In my last post I told you about a trip that we were going to do. I wrote a travel diary during the trip and I thougt I would post it here as well. I hope that I can give you some travelling inspiration.

Trip to Edinburgh Wednesday March 1st 2017
We started our journey with a train ride to Arlanda, the airport outside Stockholm. We had booked a room at one of the fancy hotels at the airport. Hotel Clarion was modern and very fresh. It was creepy-modern, you know, with glossy surfaces, sharp edges, artsy fartsy wannabe, stiff smiling staff and perfumed air in the lobby. I think places like that are creepy anyway, not welcoming at all.

Thursday March 2nd 2017
Godness gracious how nervous I was to board the plane. My last rides with aircrafts wasn't pleasant at all. It wasn't helping that the toilets at the gate, reeked with vomits and bad stomachs. Once up in the air, the calm laid my worries to rest. Before landing, the plane took a huge turn over the Highlands and the stewardess sang the farewell waltz to us, thus the landing ended with applauses, just like a charter tour in the old times. 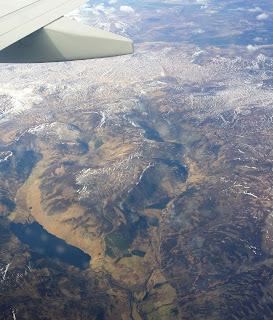 My thoughts when we flew over Scotland is that it's not many trees. The Highlands seems to be mountains and dry grass. The rest of Scotland is buildings and farm land. Hardly any forests to be seen. I guess I'm a spoilt Swede when it comes to forests and wildlife.

Our hotel was fancier than I imagined. We were greeted by a door man with whom we had our first real chat in english. It was extremely hard to understand what he said. It sounded like "Dumble goobly wobly mumble". We nodded and said yes, no, thank you, hopefully at the right places and after a while understood that our room wasn't available yet so he put away our luggage in a locked room and gave us the tip to have lunch in the hotel restaurant. We refused politely and said that we would take a stroll around town to have a look. We had the same ideas about hotel restaurants, they are usually not very high quality.

We took a walk around the neighbourhood but didn't find anyplace to eat except a restaurant nearby the hotel. We took a burger and a bear at the pub section. It was pleasant and very good food. When receiving the reciept, we discovered that we had gone to the hotel restaurant anyway. Apparently the hotel owned the café, the pub, and the restaurant in the connecting building. It was hard to hear what the pub staff said, like the door man, felt stupid to think that we thought that we actually speak almost fluid. But actually, most people in Edinburgh speak understandable english even the native ones. Edinburgh is a city with lots of people from other countries.

The direction of the evening stroll was Calton Hill. This town is brim filled with monuments, statues, plaquettes over God knows who and what. Lots of important blokes and saints and architects (because he designed a building, lets make him a monument!!). 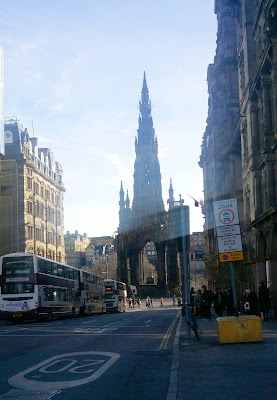 The Scott monument is very impressive in Victorian Gothic style (swoon). I first thought, oh a monument for the Scottish people..or maybe a king. But it was the writher sir Walter Scott that was acclaimed with this fancy landmark. The view over the old town (auld reekie) is wonderful. 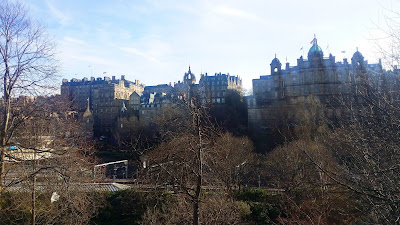 Me and Johan at the bottom of The Scott monument. 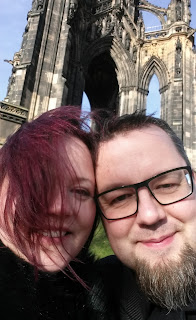 We passed a faboulous building at the walk. The Balmoral hotel. I wish we had the time to have afternoon tea at our trip, but we didn't. 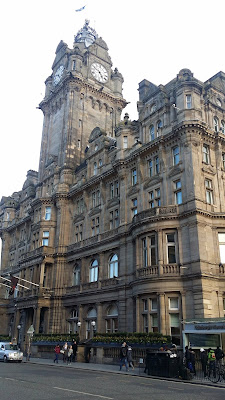 We stumbled on a graveyard walking towards Calton Hill and we needed to take a closer look at it. 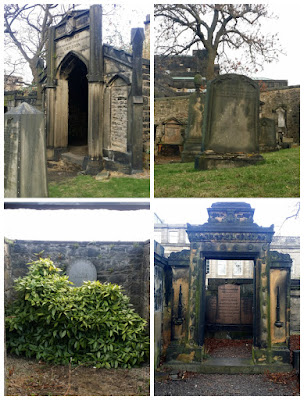 Old Calton burial was established 1718 and were in use until the late 19th century. Many famous and eminent people are buried here. Of course, beside the mausoleums, there are monuments here over philosofers, brave soldiers and martyrs. 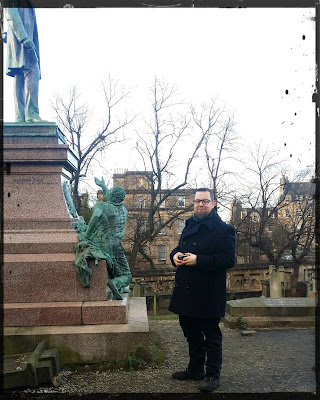 Behind a thick wall is a fancy building called the Governor House. It belonged to the prison that once laid here, upon a cliff, for all the citicens to view and fear. 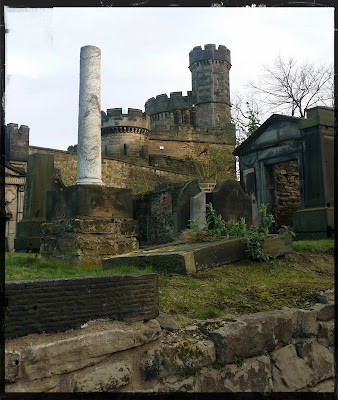 Calton Hill is a recommendation, if you like to take walks and look at the view. 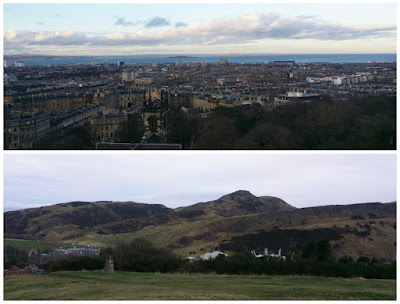 The top view is a photo of the more modern part of the town with the harbour. The bottom photo is a view over Holyrood park and palace.
Calton Hill has never been a place with buildings but a place for walks and recreation. The filosofer David Hume founded a training track here, first in the world, they say. Claiming excersize as healthy.
The photo below shows two war monument, over the war against Napoleon. Do you know another town with more monument than this one? 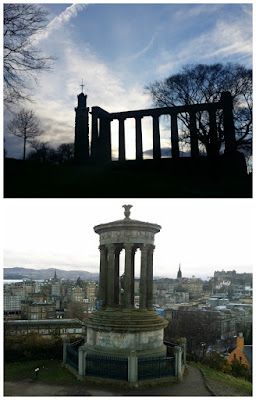 The Greece inspired monument above, yeah yeah, another one. Is built for the Scottish philosofer Dugal Stewart, who also were a professor at the university.
Below to the left: The bottom of the Nelson monument in beautiful neogothic style, I wonder if someone lives there or if it is a workplace, nice place anyway.
Below to the right: We could see the people sitting in meetings at great tables in the Schottish Government, we imagined them having meeting about exiting Great Brittain. We were probably right.

The dusk is setting and it's time to leave. I later read that it was a gay park and that people had been harrassed after dark. By the leaving light, the mist arrives and it gets suddenly freezing cold. 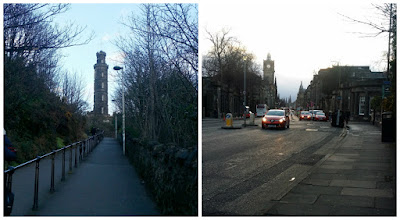