Ghosts and Harry Potter of Edinburgh - Friday March 3:rd 2017
Note the year. This was last years trip.
We wake up to a new bright shining day in Edinburgh. Our hotel room has a view over the backyard, it's actually nice. I'm fascinated over the draining and sewer pipes on the outside of the houses, this would never work were I live, with the freezing temperatures.
We eat a lovely breakfast at the hotel restaurant. I'm used with self service and not a waitress running for my eggs and soldiers (funny name) 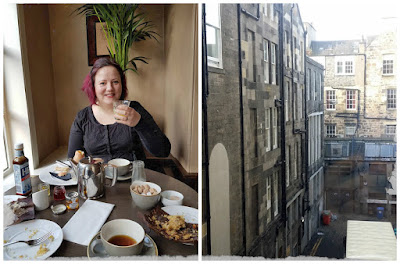 Before noon, we walked towards the old town. North Bridge goes on top of the Waverly Rail station and gives you a nice view over the city. 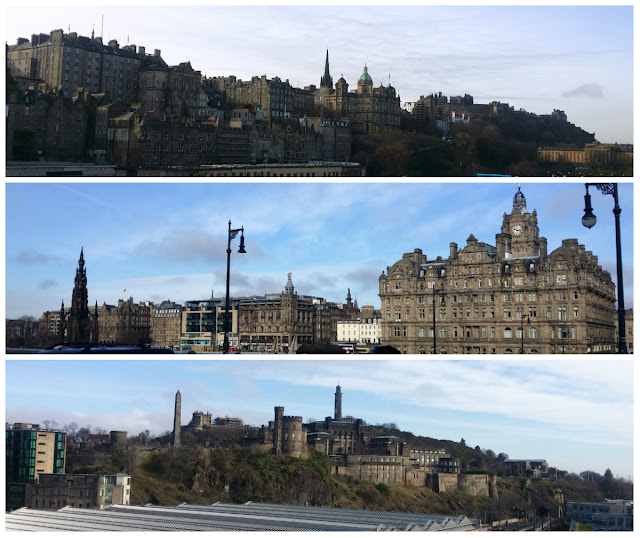 Top photo: View over the old town. The pointy thing is the Hub, a cathedral turned to a exhibition/festival/tourist center- ish
Middle photo: View over Princes street. From the left: Scotts monument, fancy stores, St Andrews square and the Balmoral
Bottom photo: Calton hill. The obelis is the Political marture monument

The Waverly station is built on top of a lake were people once got their water, were they washed their clothes, they had witch trials (the floating test) and were all the dirt from the streets (including excrements) washed out. 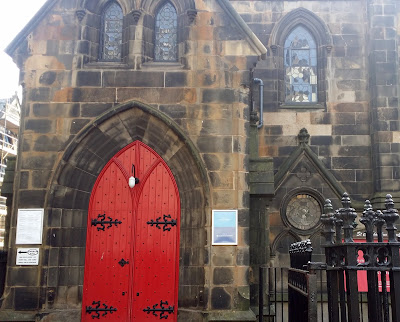 The architecture is very gothic. Most of the houses are actually from the 19-th century and newer, but the style gives you a feeling of even older times. The Royal Mile is the wide street running through the old town, from the castle to Holyrood palace. From the main street, small windy alleys are stretched between the houses. The names are often ended with wynd or close. 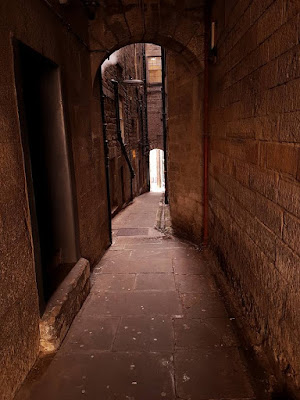 Brodies Close remind me a lot of Knockturnal alley. It is dark, from a ventilation hole misty fumes blows. When we passed later at night, the alley was completely black and creepy. 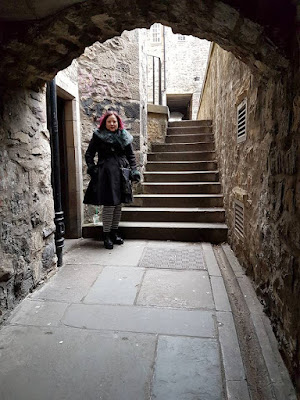 As the Royal Mile is placed on a hill, allmost all the closes have stairs. You can climb up to 100 meters, so even if the close looks short on the map, it is actually twice as long and steep. So I wouldn't recommend this town for people with mobility problems. I also highly recommend you to put on decent shoes. I regret my choice of shoes. Here I stand in Advocates close, catching breath. 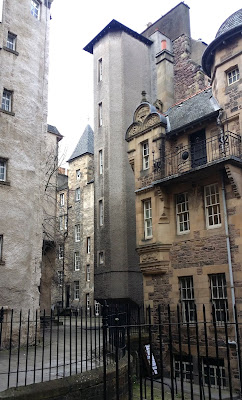 A small backyard at Lady Stairs close, were you can find Writers museum. 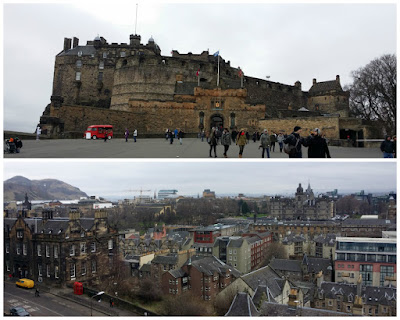 We didn't visit the Castle, we went there only to look at the view.
The tower on the bottom photo shows George Heriots School. A school for well suited children. It is said that the school was an inspiration for J.K Rowlings Hogwarts. We walked past later and looked through the fence and saw young people dressed in military uniforms (combat-style) doing some excersises and marching. 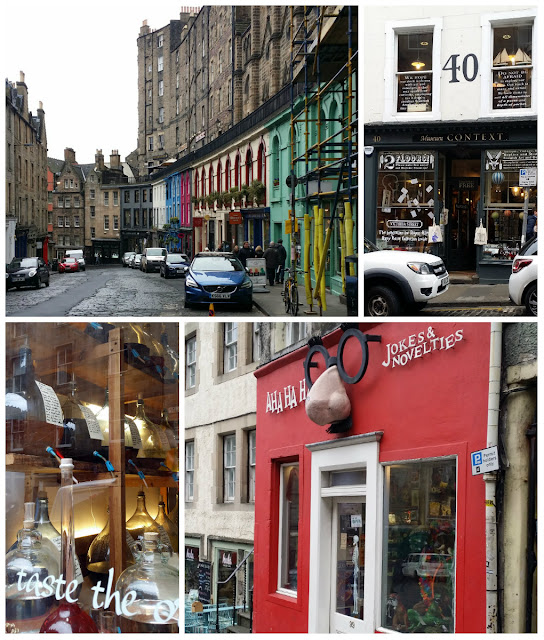 Victoria street is said to be the inspiration for Diagon alley. A vareity of different and colourful shops in rows along the street. The Context sells different kinds of knick knacks and Harry Potter stuff. A liqeur store were you can buy spirits on the tap and a toy and joke store wich reminds a lot of Zonkos or Weasleys Wizard Weezes. There were also an antique store that was said to be the origin of Borgin and Burkes, but the store behind dusty windows were closed for the moment. 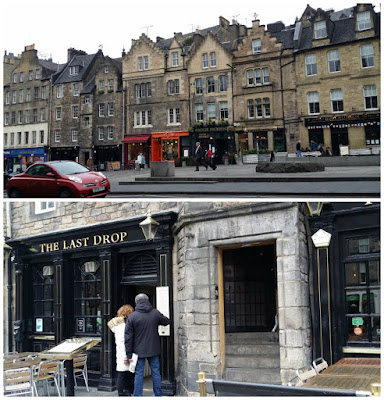 Victoria street, ends in Grass market were you can find pubs in rows, one reminded me of the Leaky Cauldron. 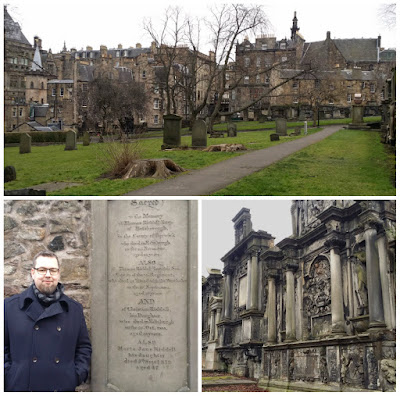 While we were at the right side of town doing search for Harry Potter, we had to visit Greyfriars church yard. The oldest graves are as old as the 16th century. It is beautiful and peaceful (by day) with ornate head stones and mausoelums. But lack of space made the care takers move the stones, so you can't be sure were the people rests. There were also a few mortsafes left. Mortsafes are cages in cast iron that were placed over newly buried, that needed protection from bodysnatchers or Ressurectionists as they called themselves. We also found Tom Riddles tombstone and a McGonagall. The Greyfriars is supposed to be very haunted.

As I said, Edinburgh is very hilly and the town is built in layers. Bridges were built for easier transportation and lower levels of these bridges became habitats for the "lower" citizens. 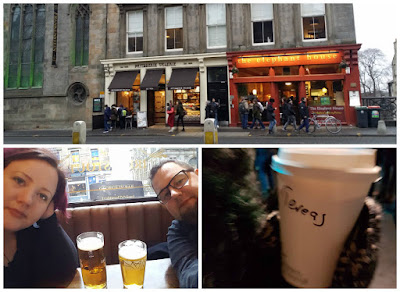 At George IV bridge we foud The Elephant House, were some of the Harry Potter books were written. We had som afternoon tea. I can't recommend you that place, because it was crammed with lousy but expensive food, flies and grubby. Take the door to the left instead.
Tired of all the walking, we took a pint of beer in a moldy pub at the same block. We waited a couple of hours for our ghost tour to begin.

With a coffe in our hands (with a misspelled Scottish interpretation of my name),  we catched up with our tour guide by Trons Kirk. There are a few ghost tours, we chosed the Edinburgh underground Ghost Tour. It wasn't under ground very much, only a visit in one of the vaults under South bridge. As I said, the Vaults were used by the poor as apartments and for shady buisnesses like smuggling, robbery and brothels. The Vaults were hidden and forgotten until they were found again in the 80-s. The tales says that the mass murderers Burkes and Hare had their hideouts here (recognize a name here?). 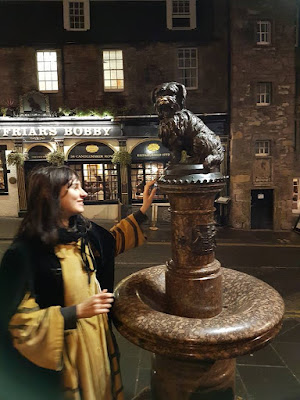 The tour passed through Greyfriars and Greyfriars Bobby, the only pet buried within the walls of the grave yard.
By linnea-maria kl. 13:36